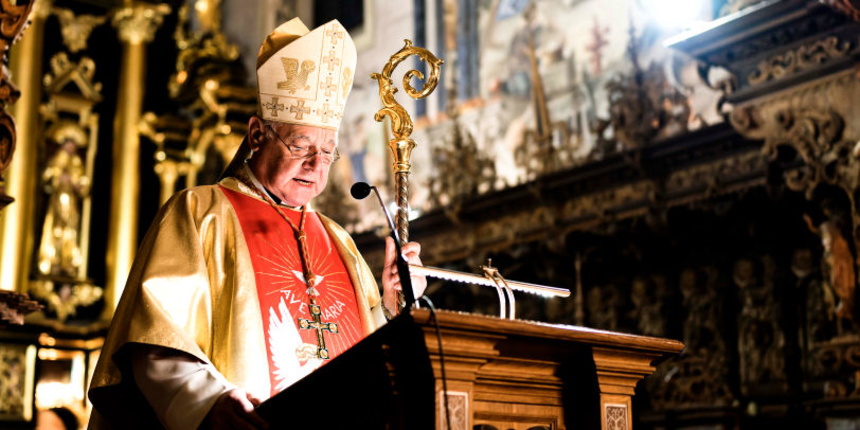 "Why being a Christian?"

"By inner-worldly reasoning, the truth of revealed faith can neither be proven nor disproven. The Church knows that we are lost without the gospel of Christ." Homily of H.E. Cardinal Gerhard L. Müller in Oxford/Oriel College

Oxford-Vatican (kath.net/pl) kath.net documents the sermon of the Prefect emeritus of the Congregation for the Doctrine of the Faith, Gerhard Cardinal Ludwig Müller, on June 12, 2022 in Oxford (Great Britain) at Oriel College and thanks H.E. for kind permission to publish.

As Catholics we connect our good will towards all human beings with the marvelous experience that, in the light of God, all things – past, present, and future – have a purpose. When the sacrifice of Christ for the salvation of the world becomes present in the Mass, we give „thanks always and for everything to God the Father in the name of our Lord Jesus Christ“ (Eph 5,20). We thank God for having created the world, and for giving us all we need. We thank him, that for our sake Christ became man, and for sending us his Holy Spirit. We thank him for the Church, who has become our Mother in faith: she is the Body of Christ, in which we have been incorporated through baptism and confession of the catholic faith. We thank him for our families, in which we were allowed to grow up, and for our friends, who are our faithful companions through life. And if God has called us to marriage, we thank him for our husband or wife, and for the children we love, because they are God’s gift to their parents.

As Christians, we have a musical awareness of life: In our hearts resounds the song of thanksgiving of the redeemed. Its melody is love, and its harmony is joy in God. We do not believe in the superficial optimism of fate, which we hope will remain kind to us. No one will be spared the suffering of this world, and everyone has to bear his or her cross. Instead, in work and leisure, in happiness and pain, in life and death, a Christian puts all his hope in Christ alone for „we know that all things work for good for those who love God, who are called according to his purpose“ (Rom 8,28). Like water bursting from a source, becoming a living stream that can make the desert blossom, so our joy in God is the seed on the field of our life that brings fruit, a hundredfold. Adoration of God in the spirit of Christ is this: „to offer your bodies as a living sacrifice, holy and pleasing to God, your spiritual worship“ (Rom 12,1). Following Christ’s example, who gave his life on the altar of the cross, our life is a sacrifice to God. But the same Christ, through his resurrection, has also opened the door to eternal life for us. This is our faith.

Today, however, many Christians are anxious and concerned: Looking at the crisis of traditionally Christian societies in the West, and at the scandals in the Church, does Christianity still fit into our time? Is the rock shaking on which Jesus built his church?
The crisis in the church is man-made and has arisen because we have cozily adapted ourselves to the spirit of a life without God. There is no failure of Gods's grace, but only a lack of our adequate response. This is why in our hearts so many things are un-redeemed and long for substitute gratification!

But the one who believes, needs no ideology. The one who hopes, will not reach for drugs against the nihilism in his heart.
The one who loves, is not after the lust of this world, which passes along with the world. The one who loves God and neighbor, finds happiness in the sacrifice of self-giving. We will be happy and free, when in the spirit of love we embrace the form of life to which God has called each one of us personally: in the sacrament of marriage, in celibate priesthood, or in religious life according to the three evangelical counsels of poverty, obedience and chastity for the sake of the kingdom of heaven.

I would like to evoke a famous Christmas homily by St Leo the Great. In the midst of the migration of peoples and dissolution of order, as the Roman empire disintegrates, the holy Pope Leo speaks to the personal faith of each catholic. With his words, I would like to address every catholic today who has become unsettled in the present crisis of the church: „Christian, acknowledge your dignity, and becoming a partner in the Divine nature, refuse to return to the old baseness by degenerate conduct. Remember the Head and the Body of which you are a member. Recollect that you were rescued from the power of darkness and brought out into God's light and kingdom. By the mystery of Baptism you were made the temple of the Holy Spirit: do not put such a great guest to flight from you by base acts“ (Sermon 21,3).

We cannot escape the deadly poison of the serpent if we strike friendship with it, but only if we prudently keep our distance and have the antidote ready at hand. The poison paralyzing the Church is the opinion that we should adapt to the Zeitgeist, the spirit of the age, that we should relativize God’s commandments and reinterpret the doctrine of faith.„The Church of the living God” is „the pillar and foundation of truth” (1Tim 3,15), but today some people would like to reconstruct her as a convenient civil religion. A post-Christian society, and anti-Christian opinion makers in the mainstream media, approve of such self-secularization. But that in no way means they accept the faith in Jesus Christ, never mind that some church authorities are confused about this. People lurking around the Vatican, trying to instrumentalize the pope for their agendas on climate change and population control, are not getting closer to the Church, but only those who together with St Peter are looking to Jesus and confess: „You are the Christ, the Son of the living God” (Mt 16,16).

The antidote against secularization of the Church is the „truth of the gospel” (Gal 2,14), and living „by faith in the Son of God who has loved me and given himself up for me” (Gal 2,20).

Today, the tempter’s magic phrase is „necessary modernization”; consequently, anyone opposing this ideology will be fought like an enemy and will be accused of being a traditionalist. Let me give you one example of this perverted logic: Protecting human life from conception to natural death is discredited as a „conservative”, „right-wing” political position – while at the same time killing innocent unborn children is declared to be a „human right”, and therefore deemed „progressive”. In politics and media, it is all about power over human minds and over the money in people’s pockets. For this purpose, people are being conditioned by using campaign slogans like „conservative” or „modern”. But faith in God is concerned with the contrast between true and false, and ethics is about the distinction between good and evil.

For some, the Catholic Church is lagging behind by 200 years compared to where the world is today. Is there any truth to this questionable accusation, formulated even by some church leaders? An accusation that opinionated atheists gleefully repeat in their Schadenfreude (gloating)! Progressive Catholics, for their part, play the model students of the Enlightenment, promising they will quickly catch up to the lessons of atheistic criticism of religion.

Does „necessary modernization” mean the Church should reject the historical revelation of God in Jesus Christ? Can the Church be faithful to her foundation, and to her founder, if she mutates into a religion of humanity? The allegedly peaceful agnostics of today generously allow the simple people to keep their religion, but they are eager to use the potential of meaning the Church possesses for their own purposes: They do not hold revealed faith to be true, but would like to use it as building material for the new religion of world-unity. In order to be admitted to this international meta-religion, the only price the Church would have to pay, is giving up her truth claim. No big deal, it seems, as the relativism dominant in our world anyway rejects the idea that we could actually know the truth, and presents itself as guarantor of peace between all religions and world views. And in fact: a Catholicism without dogmas, without sacraments, and without an infallible magisterium, is the Fata Morgana for which even a number of church leaders are longing.

But because in the „fullness of time, God sent his Son, born of a woman” (Gal 4,4), whom the shepherds of Bethlehem found as „the infant lying in the manger” (Lk 2,16), every time is immediate to God.

Jesus cannot be surpassed by the changing of times, because God’s eternity encompasses all eras of history and the biography of each person. In the concrete human being Jesus of Nazareth, God’s universal truth is concretely present here and now – in historical time and space. Jesus Christ is not the representation of some supra-temporal truth: He is „the way, the truth and the life” in person (John 14,56). God „wills everyone to be saved and to come to knowledge of the truth. For there is one God. There is also one mediator between God and the human race, Christ Jesus, himself human” (1Tim 2,4f).

The Church walks with the times in their societal changes. And theology, in dialogue with modern, scientific and technological worldviews, formulates how faith and reason are compatible. Faith is a knowledge of God’s truth, and a light in which we understand ourselves and the world in its innermost origin and purpose. This knowledge, however, we owe to the Word of God who „became flesh and dwelt among us” (John 1,14).

By inner-worldly reasoning, the truth of revealed faith can neither be proven nor disproven. The Church knows that we are lost without the gospel of Christ. In her womb, Mary conceived God himself, who was born from her: Jesus Christ, the one Savior of the whole world. He alone can save the world; and frankly, I also would not want to be saved by anyone but him, true God and true man. Merciful Lord, may the Mother of Mercies intercede all the times of our earthen life, because through her „we were found worthy to receive the author of life, our Lord Jesus Christ, your Son, who lives and reigns with you in the unity of the Holy Spirit, one God, for ever and ever”. Amen.