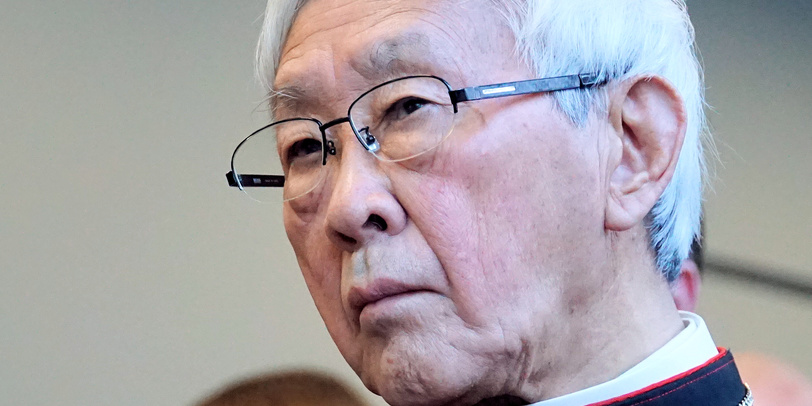 Stephanus Prize 2018: It is a special honour to wear this colour, not because it represents power but because it displays service. Laudatio in Honour of Cardinal Joseph Zen Ze-kiun by Prof. Thomas Schirrmacher

Most Reverend Eminence,
Distinguished Mrs Aneequa Anthony, recipient of the Stephanus Prize 2017,
Dear Mr Link and dear Mrs Koller of the Stephanus Foundation,
Distinguished guests,
Last year I visited the directors of the religious affairs bureau of the Communist Party in Cuba, which is in the process of loosening its control over religious entities. The new archbishop of Havana, who also chairs Cubas Conference of Catholic Bishops, has been outspoken on human rights. Among other things, he spoke up publicly in defence of our partners in the International Society of Human Rights (ISHR), the brave Ladies in White who are mothers and relatives of political prisoners in Cuba.

Just a few weeks ago, I spoke to the National Political Academy of the Communist Party of Vietnam, addressing party leaders and doctoral students at the Human Rights Institute on religious freedom issues. The director who hosted me there had visited the ISHR in Frankfurt in 2017. Vietnam is clearly moving towards greater respect for religious believers and their faith. Surely there is a long way to go, but the direction is clear.

We wish that we could report similar developments in China. Granted, China today is not what it was under Mao, when millions of Christians were killed as the government extinguished all forms of official, visible Christianity. But some troubling things have happened recently.

In February 2018, a new and stricter law on religious affairs took effect. In March, the Chinese government dissolved its State Administration for Religious Affairs and instead transferred responsibility for religious affairs to the Communist Partys United Front Work Department (UFWD), known as one of the strictest organizations in the party. The man charged with this role will be Xia Baolong, who in 2013, as Zhejiang provincial party committee secretary, was responsible for taking down 1,700 crosses from Catholic and Protestant churches.

The UFWD will now also have direct control and day-to-day oversight the over the state-run organizations of all five official religions, including the state-controlled official Catholic and Protestant churches in China. These official churches make up at most one-third of all Catholics or Protestants in China; the remainder of the incredibly large number of Christians belong to underground church networks, which are sometimes quiet visible, but which have declined to come under state control. The Catholic Church, for the most part, has bishops appointed by the Pope but not accepted by the Chinese government; the official church, conversely, has state-appointed bishops some of them not accepted by the Vatican.

Pope Francis has the understandable goal of healing this split and would like to renew diplomatic relations with China, which were broken off in 1951. I have discussed the situation with him, since our situation as Protestants is quite similar and the World Evangelical Alliance leadership has had many discussions with the government too. As part of the ongoing negotiations, the Vatican asked one of their bishops appointed without the consent of the Chinese government, Bishop Guo Xijin of Mindong, to step down and become the auxiliary bishop under Zhan Silu, a bishop of the state-controlled Catholic church, who was to replace him. Based on what we know, it appears that Bishop Guo refused to step down or to concelebrate Easter Mass with Bishop Silu.

Before the Vatican could even react, the Chinese government arrested Bishop Guo! As a result, negotiations between the Vatican and China are now on hold, even though it seems that Bishop Guo is back home again.

But all this is good for us here today in one way, because this conflict is the reason why our honourable guest, His Eminence Cardinal Zen, is among us. He is the loudest voice speaking out against, as he has called it several times, a rotten compromise between Christians and the Chinese government. But he promised to be quiet for the rest of his life if the Holy Father signed any kind of agreement. Thanks to the unexpected arrest of Bishop Guo, which proved every word of Cardinal Zen to be a realistic and accurate description of the situation, nothing has been signed so far and we have the honour of having the Cardinal here.

Cardinal Joseph Zen Ze-kiun, S.D.B., Bishop emeritus of Hong Kong (China), born 1932 in Yang King-pang, Shanghai, is receiving the Stephanus Prize in honour of his courage and endurance in defending religious freedom and in stepping forward on behalf of human rights defenders.

For example, in 2011 a new law allowed Hong Kong to take over 300 Catholic schools and turn them into government schools. The Cardinal, being 79 years old and not a spry young man, nevertheless went on a hunger strike, causing the whole world to become aware of the situation.

I could give many more examples of how this Salesian priest and bishop has stood up for his fellow Christians in China again and again. His Wikipedia biography contains numerous specific instances.

The red in a cardinals cloth, like the purple on a bishops clothes and shirt, by tradition stands for the blood of the martyrs. The red in Cardinal Zens clothing truly stands for the blood of the martyrs. The highest honour of a bishop is not his legal authority, but that he represents a church built on the seed of the blood of the martyrs, something that is as vividly true in China as anywhere in the world. Wearing red indicates a willingness to risk ones life and place it in the hands of the Lord God. It is a special honour to wear this colour, not because it represents power but because it displays service. It expresses solidarity with the powerless and ones willingness to die for it.

Is this all that Cardinal Zen stands fora high-ranking Christian speaking up for Christians? No, there is much more. Cardinal Zen has been first a clear voice against the discrimination of Christians, second a defender of religious freedom for all faiths, and third a symbol of human rights in general far beyond religious problems alone.

Let me give you an example of the second topic. At the ISHR, we are especially involved in advocacy for adherents of Falun Gong and against the evil of organ trafficking, including killing prisoners in order to take their organs. This practice has been documented by researchers and experts independent of the Falun Gong religious community, such as by the former UN Rapporteur on torture, Manfred Nowak, professor of public international law in Vienna. We welcome the representatives of Falun Gong who are among us today.

You will not be surprised to hear that Cardinal Zen has raised his voice against the Chinese policy of outlawing and persecuting Falun Gong. We thank him for this bold step.

Lets move on to human rights in general. Every year on July 1, you can see the Cardinal marching in the first row of the Hong Kong march of the Civil Human Rights Front, an alliance of virtually all human rights organizations in Hong Kong. In 2014 he said to the gathered protesters, It is high time we really show that we want to be free and not slaves. ... We must unite together. During his speech, protesters were fired on with tear gas and he asked them to disperse.

Cardinal Zen not only helped to unite human rights activists, but stood up on their behalf in Chinanot only for Christians but for all people of good will, young and old, unknown and well-known.

He was and is convinced that the communist ideology is not the real driving power behind the ruling party in China. Rather, he believes that the driving force is imperialism and greed, as demonstrated by the corruption that floods its banks and remains out of control. And wherever corruption is widespread, it is nearly impossible to oppose those who violate human rights, even if one wanted to.

Let me come back to the Christian point of view once again. The Christian Scriptures, in Romans 13:17, call on Christians to submit to the existing authorities, which we nowadays call the state. Why? Because God ordained the state to protect those who do good and punish those who do evil. This is the reason why Christians are good citizens, including Cardinal Zen. He never called for a revolution; he never questioned the existence of the state or the need for law and order. Romans 13 has often been misused in history to teach that the church must passively accept every evil perpetrated by the state and must always obey the State. But in reality, the author of Romans 13 himself never acted in this way. Elsewhere, in Revelation 13, the New Testament even refers to the state as having the spirit of the antichrist.

The rulers of history often were nervous about Christians, even if they were good citizens who paid their taxes on time, helped fellow citizens in need and recognized the moral justification for government. Why? Because Christians do not view the state as the source of all power and wisdom. They do not obey the state because they believe that it is perfect, but because God commands them to obey the state. In this obedience, they live out what Peter once said: We must obey God more than man. We must obey man. If no one obeyed anyone else, we could not function as a society. But we obey God more. Therefore, O state, stand up for the good, defend human rights, help the needy, and we will be the nicest and most supportive citizens on earth. But if you use your power to steal from the poor, to suppress the faithful and to arrest those who do goodwe will still pay our taxes, we will not take up weapons or organize a revolution, but we will raise our voice for the freedom and rights of each individual, as we believe that everyone was created in the image of God and should be protected by all fellow human beings and especially by the state.

Your Eminence, as one of the first-Cardinals from China, you are the living symbol of this complementarity of Romans 13. You love a country that has killed millions of Christians. You show no hatred, but only the deepest wish for a just and peaceful future for your people and their leadership. Your totally peaceful and respectful, but bold and risky action in standing up for those who are oppressed and persecuted makes you more than worthy to receive the Stephanus Prize, named for the first Christian martyr. You teach all of us that the Christian faith is not a search for power and money, but a peaceful spreading and standing up for nothing else than the truth.

I thank Bruce Barron for editing this laudatio.