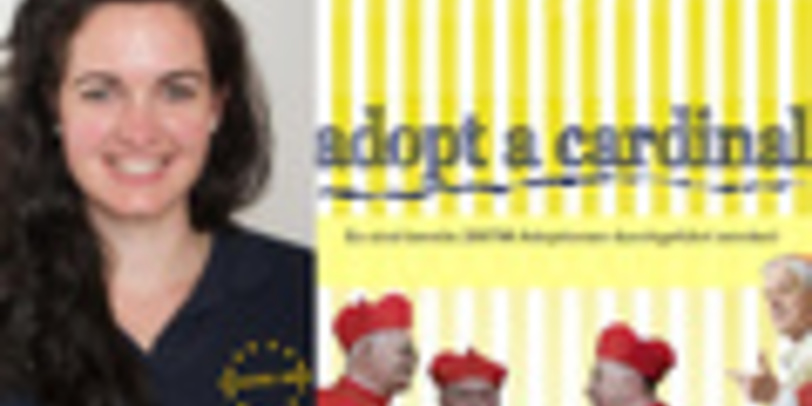 We are absolutely overwhelmed and are seeing the hand of God

The prayer-initiative Adopt a cardinal is stirring a spark and invites to pray for the conclave and for the personally adopted cardinal. KATH.NET-interview with Julia Kleinheinz. By Petra Lorleberg

Pfaffenhofen (kath.net/pl) In the meantime people are praying all around the world. This means that we have got somewhat of a 24/7 prayer going on, in which we are ceaselessly stretching out our hands towards heaven in intercession and Eucharistic adoration for the cardinals in order for them to have a spirit filled conclave, says Julia Kleinheinz, a 27-year-old marketing expert of Bavaria/Germany, who is involved in the leadership of the catholic young adult movement Youth 2000. In an interview with kath.net she gives us account of the prayer-initiative "Adopt a cardinal" she helped to initiate, which is stirring a spark on the internet, as more and more people are signing in on the site of Adopt a cardinal and almost led to the breakdown of the webpage. Two and a half weeks after the launching of the site, more than 441.000 people have already signed up to support the cardinals with their prayers, and the end of that boom is not yet foreseeable.

kath.net: Ms. Kleinheinz, would it be possible to say that Youth 2000 has somewhat caused an avalanche with their initiative? Did you expect such a strong response?

Julia Kleinheinz: When we started we didnt have a final goal or a concrete idea of what was supposed to happen. Our motivation was to simply offer a platform to our family, friends, and other movements to invite them to pray with us for the cardinals as we felt they really needed our prayer. Well, in the end it remained what it was supposed to be, with the exception that by now we have been able to reach not only friends, but a worldwide community.

We as a team are absolutely overwhelmed and are seeing the hand of God in this. Whats happening right now really gives us an inkling of what the universality of the church means; it is not confined to the boundaries of nations or anything else, and that really provides us with joy and excitement.

kath.net: Who is the cardinal you have adopted?

Kleinheinz: I adopted cardinal Polycarp Pengo, archbishop of Dar es Salaam in Tanzania. I wrote his name on my large prayer-wall, and I am praying for him daily.

I also made a deal with God which involves two things. Whenever the cardinal needs prayer throughout the day, I asked God to let me know. It really works. I have to think quite often of him throughout the day, and when God reminds me I stop what I am doing and pray a simple prayer for him and ask for the blessing of our Holy Mother.

The second thing is, that I am offering up small sacrifices and sacrifices of love I make throughout the day for my cardinal. God is really taking me up on my word, as my opportunities for doing so have rapidly increased lately.

But through those two things I feel quite close to my cardinal and feel like I can really support him.

kath.net: What are you hearing from other people who have adopted a cardinal?

Kleinheinz: The feedback is amazing. We are sitting in front of our computers so often and are awestruck. Whole families are adopting cardinals, some are using their cardinal as a background image on their smartphone, school classes are adopting and praying together for their cardinal.

Even some religious orders got involved. Some sisters adopted a cardinal for their order, and some priests are being asked by the elderly and sick to pick a cardinal for them. We received an email from a parish yesterday in which they asked to lift the limit of possible adoptions of cardinals as people were storming their office to adopt a cardinal. Incredible!

I was personally really touched by the witness of a woman who thanked us for the initiative. She told us that she was feeling like she had a new son now for whom she would like to pray for the rest of her life.

Many are telling us that their view as well as their heart has been transformed as they were praying for their cardinal. On the breeding ground of powerful prayer, strong passion, authentic compassion, and wholehearted devotion there is strength rising up and revival happening within the church. All of that is indeed an explosive mix for the works of the Holy Spirit.

kath.net: How did you come up with the idea to start Adopt a cardinal?

Kleinheinz: A friend read a newspaper article, introducing all the cardinals with their name and picture. The same moment there was the strong thought: Those cardinals need to be prayed for and the words adopt a cardinal. We started praying and discussing the idea in order to discern and we felt more and more that God wanted us to go ahead. We invited a few others to help and got started. After eight days of intensive prayer, devotion and all-nighters with work we were ready to launch the site which went online on February 22nd at 6 pm.

kath.net: Why do you and your friends feel responsible for the conclave and the election of the new pope?

Kleinheinz: Because we are all one body. In my eyes, todays church is going through one of its toughest times. Nowadays, the cardinals are faced with very particular burdens and even attacks. We want to participate in carrying that burden by praying for them. And this prayer is already going on day and night.

By now we have people praying all around the world. This means that we are praying for the cardinals 24/7, calling unto heaven in intercession and Eucharistic adoration so that they will have a spirit-filled conclave. It is somewhat like Moses when he was praying for Joshua who was fighting against Amalek.

Regardless of the thoughts or powers that are trying to confuse, we feel that prayer is stronger and our prayer wont cease. Many people are writing to us that they feel encouraged in a new way to pray and fast for an outpouring of the Holy Spirit upon the cardinals. I do believe that in this community of many thousands praying, this prayer wont go unheard.

kath.net: Do you really believe that God will influence this conclave and that the new pope will be elected through the guidance of the Holy Spirit?

Kleinheinz: YES! If I did not, I would be someone believing that God has no interest neither in his church as a whole, or in me. Everything I have experienced about who God is and his love does speak against this assumption, and does not allow for the opposite to happen.

Even though I dont understand everything I really trust, that Gods will is going to be carried out and that in the end everything will fit in with His ultimately ingenious plan of salvation. Gods will is being carried out within and through his church which is predestined to glorify him, as it is written in Ephesians 3:20-21: Now to him who is able to do immeasurably more than all we ask or imagine, according to his power that is at work within us, 21 to him be glory in the church and in Christ Jesus throughout all generations, for ever and ever! Amen.

kath.net: As a last question, what did pope Benedict XVI. mean to you personally?

Kleinheinz: I grew up with John Paul II. He planted a huge vision into my heart: I try to live a radical life with Jesus, to live out a vision of satisfying joy and to have courage to follow my true calling in God.

Pope Benedict really accomplished to give this vision through his own example and witness. But also through his words he gave us a spiritual foundation so that I can be rooted in a sound faith and let it grow strong.

My friends and I really realized that Pope Benedict XVI. has had a profound influence in our lives. He has helped us to take the right turn in important parts of our lives, which then helped us to grow in Gods love. Through this he has become an important part of our biography.

What John Paul II had sown into my heart, Pope Benedict XVI has nourished and looked after so that it could blossom and bear fruit.

Do you want to join? Here is the link to "Adopt a cardinal"