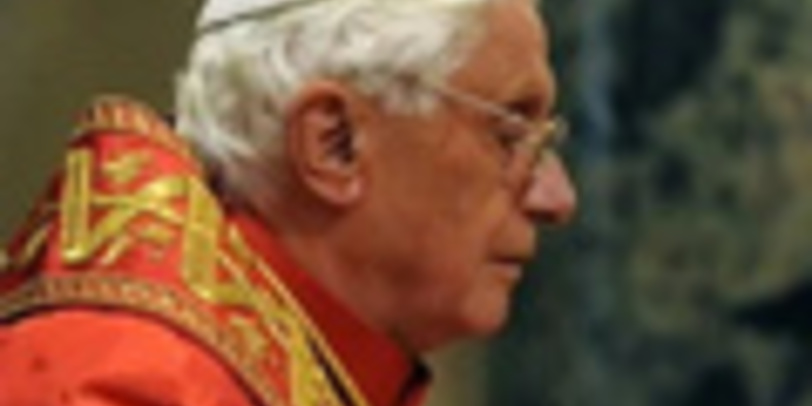 Pray not only for, but also with, the Holy Father...

This initiative originated among German Catholics in Rome, and is not something sponsored by Pope Benedict himself.

Rom (kath.net/TheMoynihanReport) An invitation to join with Pope Benedict as he prays the Rosary each evening at 6:45 p.m. (Rome time)

Catholics around the world are being invited to not only pray for the Pope, but also with him, starting now, as he faces some of the greatest challenges of his pontificate.

This initiative originated among German Catholics in Rome, and is not something sponsored by Pope Benedict himself.

But the Pope has been informed that the initiative has been launched, and is said to be heartened by the thought that others around the world will start to pray with him.

The German lay Catholics who are sponsoring the initiative believe the knowledge that others are praying with him will lessen the Pope's sense of isolation and vulnerability in these days, after the privacy of his own household has been betrayed by one of his closest collaborators (the "Vatileaks" affair, with documents being taken without his knowledge from his own apartments).

The initiative began on June 7 with an article by German writer Paul Badde, editor of Vatikan magazine (the German-language monthly magazine which Inside the Vatican helped to launch in 2006, shortly after Pope Benedict's election).

Here is how it works. Each evening in Rome, Pope Benedict walks in the Vatican Gardens beginning at 6:45 pm to pray the Rosary with his personal secretary, Monsignor Georg Gaenswein, accompanying him and praying the responses (photo).

No one else is present; the Vatican Gardens are closed off to other visitors. (If it rains, they pray the Rosary in the papal apartments.)

But now others are being invited, wherever they are, at that hour, to pray the Rosary with the Holy Father.

If one prays the Rosary daily at this time, there will not be any direct physical connection with the Holy Father, but there can be a spiritual one.

I asked Badde if the Pope and his secretary know about this initiative.

"They know about it and appreciate it, of course," Badde told me. "But the initiative was all ours. Websites will join in, of course, but without registration. Thats the beauty of this initiative: its complete freedom."

I asked whether the Pope and his secretary pray the Rosary in German, Latin or Italian.

"They pray in German, basically, but switch easily to Italian or Latin," Badde told me.

English-speaking people who wish to join this initiative should therefore pray in whichever language they feel most comfortable, whether English, or Latin, or another language, he said.

In his article announcing the initiative "to strengthen the Holy Father" but not only "to pray for the Pope, but to pray with him," Badde begins by referring to St. Juliana of Liege's famous vision of a "spot" on the full moon -- something missing in the liturgical life of the Church.

Her vision served as inspiration for the introduction of the Corpus Christi celebration in the mid-1200s.

Badde argues that there is a shocking "spot" on the face of the Church today: the isolation and loneliness of Pope Benedict.

"The loneliness of the Pope is particularly shocking," Badde writes. "Therefore, we want to call on this feast of Corpus Christi to immediately pray not only for the Pope, but to pray with him."

He continues: "This can be done in the family, among couples, in twos, in threes, in fours, in groups, in orders and congregations, and in all of the new gathering places on the social networks and websites. It can be done anywhere, loudly or quietly  at home, at church, on the street, in cars, in gardens. And all free. Without Secretaries, without control, steering, no organization, no postage, no dues, no stopwatch, no address lists, but in the simplest way in the world: with a Sign of the Cross at 6:45 in the evening, and then the prayer of the Rosary with the Holy Father."

(The original German article may be found here: at the kath.net web site)